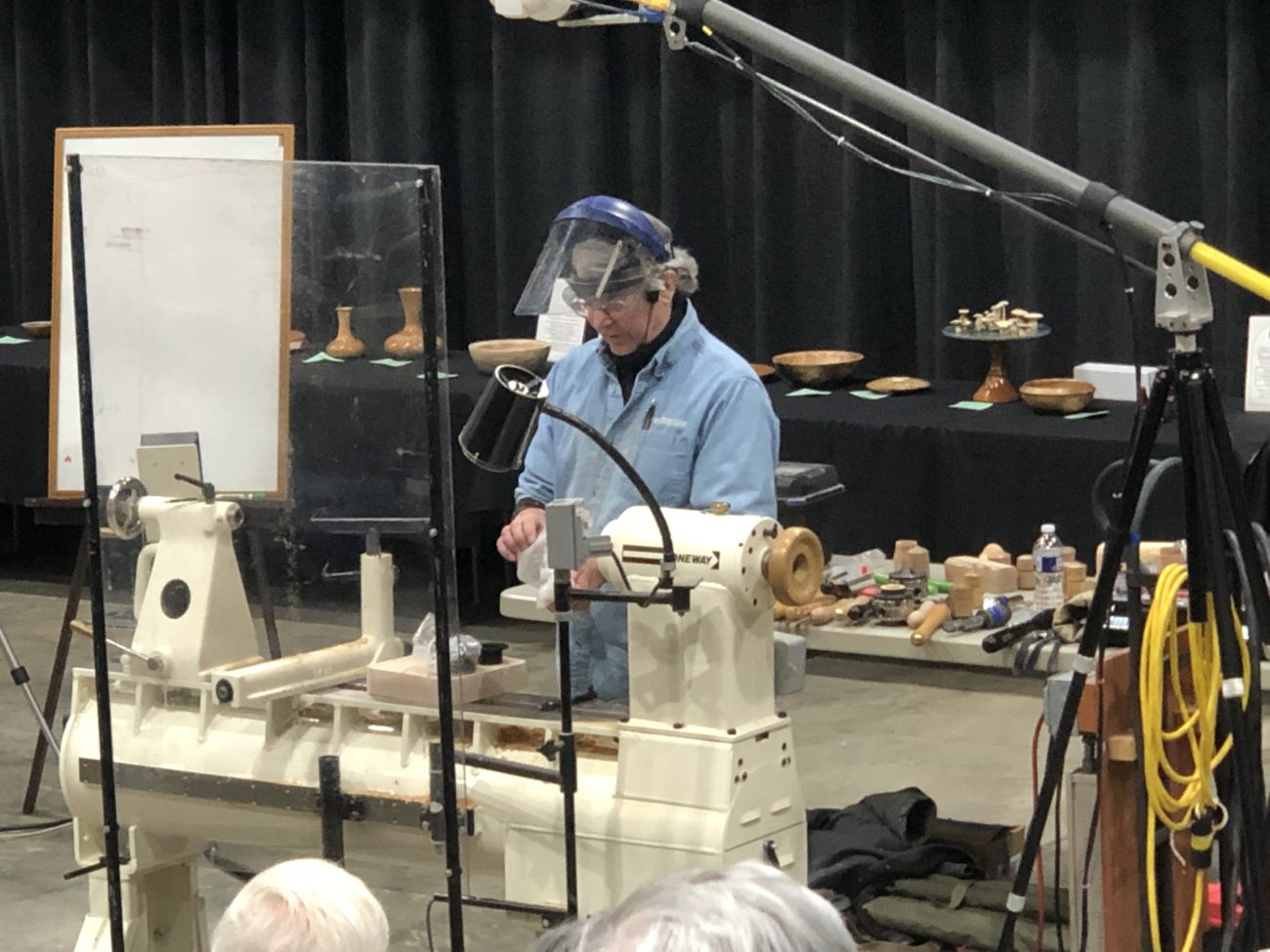 Alan Leland demonstrated at the Carolina Mountain Woodturners meeting on January 18, 2020. The topic of chasing threads was of particular interest to me as I hope to do more with end grain turning and particularly small boxes, which might incorporate this method of mounting the lid.

Alan explained that this technique requires a dense hardwood and he chose some dry Bradford pear blanks, which he had on hand. He mentioned that English boxwood was highly desirable, but not easily found. You need a dense wood with a fine close grain, which will hold the threads. The threading tools are generally available in 16, 18, & 20 tpi (threads per inch.) Many people find an armrest helpful and some use a special caliper device to help size the two pieces so that the threads on the lid will engage with the threads on the box with proper clearance – not too tight & not too loose.

He mounted a blank between centers and turned it to a cylinder & formed a dovetail tenon on each end to fit the chuck, which he planned to use. Secured in the chuck with the tailstock just supporting the other end, he parted off the section which would be the lid of the box with a thin parting tool, leaving a little extra waste wood there.

Then he did a facing cut across the lid and created a small dimple in the middle to help start the forstner bit. Turn down the lathe speed, drill in with the bit and remove some material in the top. Then go in with a relief tool above where the threads will be.

Alan then recommends removing the chuck so you can turn down the lathe speed until you can “follow the threads on the spindle.” Remount the chuck with the lid piece attached, chamfer the corner and using the arm rest, begin entering at 45 degrees, with a rocking motion, gradually turning to 90 degrees, all the while moving sideways at the speed which you saw that you could “follow the threads” when you observed the spindle threads. I know from taking Alan’s class the next day that this is an acquired skill, not something that you should expect to nail on the first try!

After you cut the internal threads in the lid, mount the other piece in the chuck, face off the end and drill out the center with a forstner bit. You will now create the external threads to engage with the threads made in the lid.

Size the shoulder, chamfer the corner, and create a relief cut below the section, which you will thread. Reduce the lathe speed again to the speed you determined that you could follow the threads. This speed is fairly slow, 300 – 500 rpm. Starting in the middle of the tool, rock it in, moving sideways as you did on the lid. The sideways movement is crucial to create the helical threads you need for the lid to screw on, as it should. It becomes quickly apparent, if you don’t move sideways, you create a series of parallel grooves, not the helical threads.

This sizing is tricky. The threads engage with each other, essentially overlapping, but not completely filling the overlap or the fit will be too tight. If the fit is too tight, remove a bit and re-cut the threads. You can also adjust the grain matching by taking a bit off the relief shoulder if necessary.

With the lid on, finish shaping the box on the lathe. Accentuate the joint with the point tool. Sand the outside of the box. Remove the lid, define the base, hollow out the center and clean up the sides where the forstner bit drilled with a scraper or box tool, then part off the box. You may reverse chuck to finish the bottom of the box, slightly undercutting. If desired, you may texture with the “elf tool.”