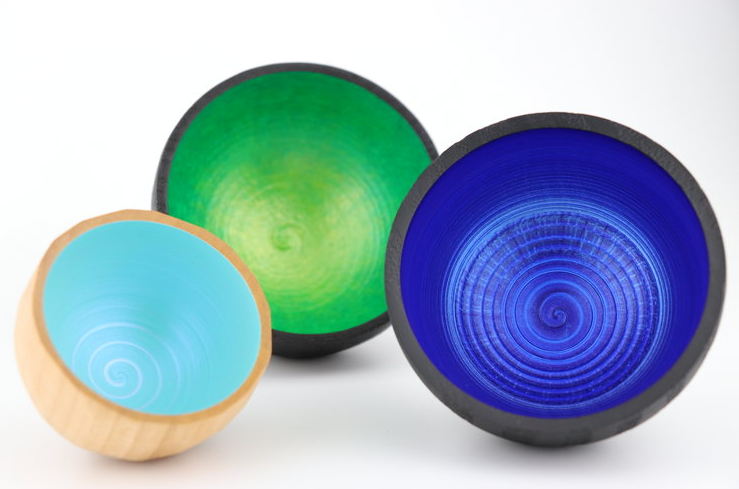 Dancing at the Lathe- Fundamental Moves

When was the last time we saw the CMW club members stand up at the start of a demonstration? On July 20, Eric Lofstrom began his demonstration by having all the members in attendance stand, move, and think about fundamental moves at the lathe. He introduced 4 basic moves that we use when we turn at the lathe. He suggests we pay attention to our movements and think about our connection to the ground as we turn.

Once we lunged and squatted, we sat back down and watched the four dance moves in action to turn a top.

Eric used two skews – see handout on website on skews, while demonstrating his dance moves at the lathe. He trued up a cylinder with the skew, and made a top in one piece – clean cutting with the skew. He also has large models of the two skews to show us how he uses them on the wood.

He next talked about ribbing vs chatter. Then he turned end grain, three skew cuts to make the tip – showed the end grain tear out, illustrating the deformed fibers ahead of the edge.

He pared fibers off with the curved skew. He creates a chatter tool by using a Fat Max handle and replacing the Fat Max blade with a Starrett hacksaw blade.

He grinds it down, adds a slight downward bend to it to create a chatter tool- you don’t want it too sharp or it won’t flex to create the chatter.

Turning an Endgrain Bowl- Namaste Series (outline of process included in handout)
Namaste – I see you – the inner light in me recognizes the inner light in you. This series is named as such because his process traps the light inside the bowl – He uses a height to width ratio, shines a light and sees the dip and thinks about how it will look – and can evaluate the form by casting shadows. He puts shellac in the interior, and then uses liquid pearls – high pigment content – pearlescent paint. Blends yellow and blue, white gesso (adds grit, allows other paints to stick to it). He uses a Sea sponge – softened with water, and dabs gesso without blending. He then shapes the outside while the gesso is drying. He then puts blue and yellow on the sponge and ends up with yellow at the base of the inside and blue towards the top and a green blend in the middle. He shellacs it first- straws of wood suck the moisture out of the paint. He prefers de-waxed shellac. He may thin it with some denatured alcohol as not doing this may cause Acrylics to raise the grain.

Turning a Square-Rim Bowl- Resonance Series Eric talked about how he turns his thoughts and feelings into the woodturning piece – recording his feelings about his interaction with the wood. In this series, there is a casting of the light across the ripples; there is no final ripple on the square – doesn’t stop with him. Poetic, pebble rippling out like the people who have had an effect on him. He showed a couple of variations – one with the backside off center, and another smaller one turned with a chainsaw with the growth rings echoing the rings – a lot of intention in his work. As he turned, he created what he called a spigot (tenon).  The bowl had a gentle curve up – then flipped to match the curve. All the while, practice, reflect, change, practice, reflect, change…

Once again, Eric referred to his dance move 4 as he turned. Ripples- same motion. He emphasized the importance of shining a light obliquely across the surface to see the shadows as he cuts. How crisp is the shadow line  – are the ripples even in size and depth? He then continued turning leaving the planned bowl diameter slightly protruding, to get an idea of what the proportion of the hole will be against the total size of the piece. – this creates a reference point for the ratio of the hole to the entire piece.

Then he puts the ripples in, leaving his reference outie on the piece. He continues to put an emphasis on sharp tools.

He then uses a negative rake scraper to smooth out the inside of the bowl. Shellac is then applied to the inside of the bowl and then painted, but with a brush this time. No primer coat means that there will be a little texture. The gesso took the texture out – this second one does not have the benefit of the gesso, so there is texture visible. Must have a pristine foundation or you will be able to tell once the piece is painted.

Eric offered several extra tips including how to use an extra fine hone- (green), as well as 320 grit cloth backed sand paper over a piece of leather to hone his bowl gouge. He also mentioned that to optimize the use of his chucks he takes them apart, soaks them in mineral spirits and then re-lubricates them with Dynalube. He does this as often as he feels necessary.

The membership greatly enjoyed the information and techniques which he presented in a most enthusiastic manner.

If you would like to renew your membership please use the following link:

This article authored and respectfully submitted by Anne Ogg.