A chapter of the American Association of Woodturners, Visit AAW → 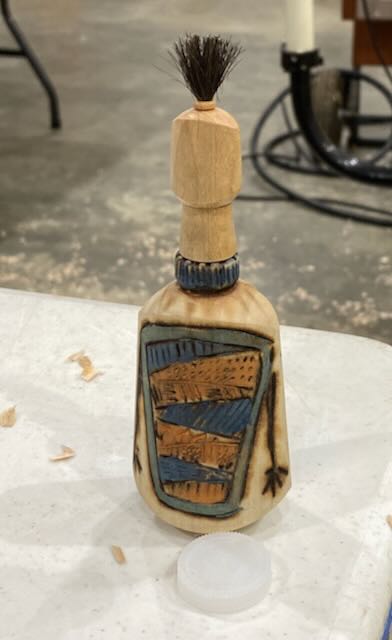 This month’s demonstrator comes to us from St Petersburg, Florida.  A woman of incredible versatility and creativity, living the moto if you can imagine it, you can figure out how to do it.  She began her career as a furniture and cabinetry maker and in 1986 learned woodturning to add turned aspects to her furniture.   Many of her pieces (columns) were large creating the need for a huge lathe – with a 5 ft tool rest and a “lift” to get the blank onto the lathe.  In 2007 she went back to school and got a degree in sculpture to add carving to her architectural pieces.  She enjoys teaching and when she learned that many of her classmates did not know how to turn, she taught them.  As part of her interest in designing for tiny living spaces, she redesigned a Chevy Express Cargo Van as both a living and teaching studio and spent a year traveling around the US to teach people how to make things out of wood.  In addition, she participated in an international turning exchange where she spent 2 months in Guatemala teaching the community to use hand tools. In 2013 she started the Strum Factory as a side project with her sister to make affordable, small batch, one-of-a-kind instruments that are easy for anyone to play. After designing them she started teaching people how to make them in schools all over the US.

During the demonstration, she emphasized the value of making “perfect” cylinders, ellipses, and triangles.  These basic shapes can be used in all aspects of furniture making and can be carved and modified for many projects.