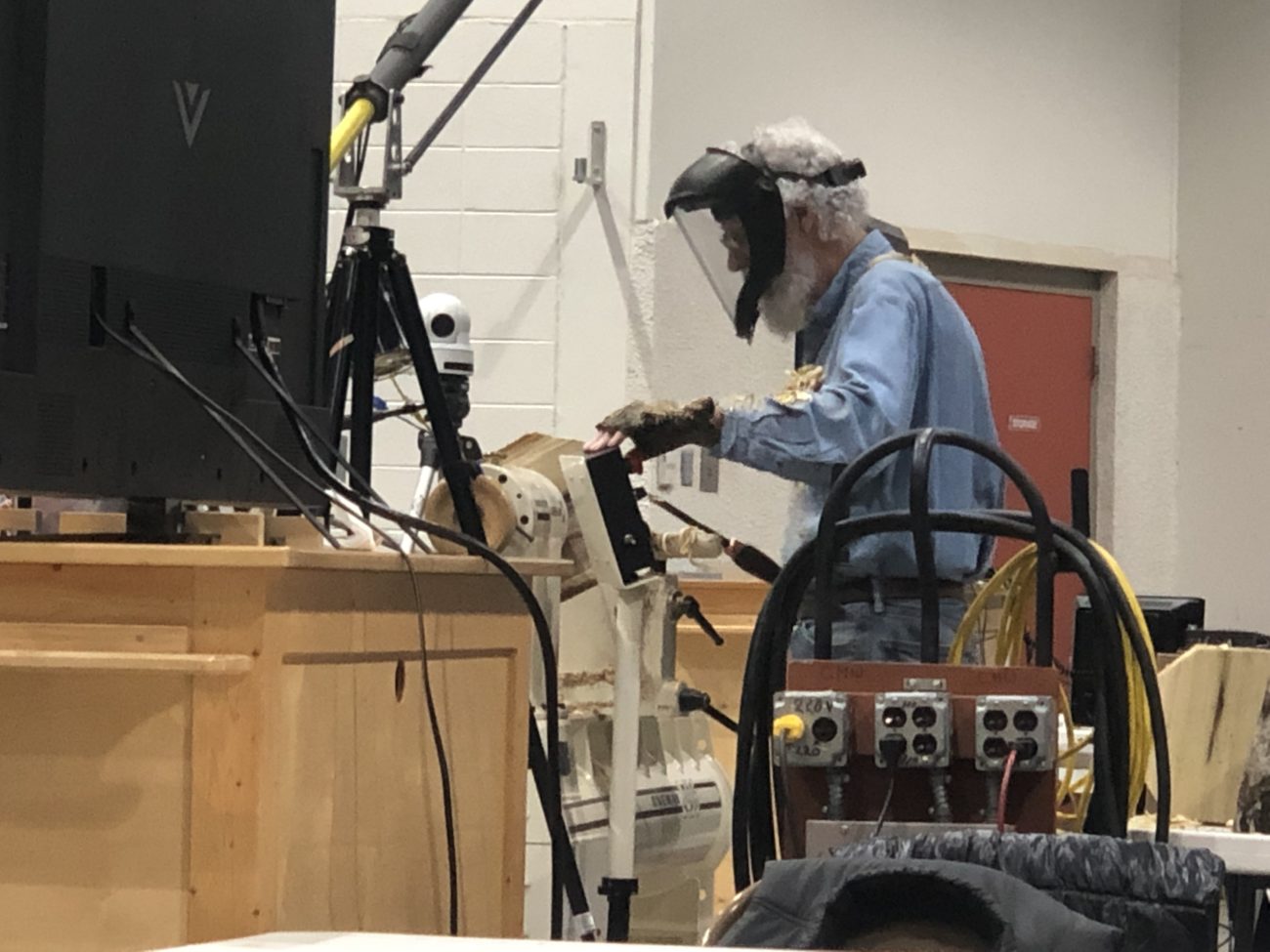 Carolina Mountain Woodturners is fortunate to count David Ellsworth among its club members. Much has been written about David and his prolific knowledge of woodturning and generous nature in sharing that knowledge. At our December 2019 club meeting, David covered several important topics: fundamentals of turning, bowl turning including a cut rim and natural edge, and then finished with demonstrating how to turn a hollow form.

David began by talking about the different cuts used in woodturning and some of the critical points in how tools have developed over the years. Earlier woodturners used short handles until it was discovered that long handles help to triangulate the body. The cut should be tangential to the fibers.

He talked about five primary cuts:
Roughing cut
He emphasized how the tail stock needs to be tightened as you rough out the vessel, all while demonstrating how he triangulated – keeping the handle against his body to help with tool control.  As he turned, he pointed out the relationship between the heartwood and the sapwood. He showed how movement with the right hand is a reflection of the tip of the gouge hitting the wood.

Slicing cut
Once the piece was roughed out, he measured the grain to see whether or not the the grain is straight through. If it is at an angle he can move the tailstock and adjust it – so that it is even on all sides, allowing a natural sense of visual order. If the grain is slightly off, it will show in the wood

At this juncture, he talked about the importance of cutting a tenon properly and the diameter of the foot. He makes a large diameter so that he has options when reversing the bowl. This gives him more options when finishing. He also talked about the advantages of a dovetail chuck vs straight. And as he turned, he showed how he was utilizing the tenon as part of the foot of the form.

He took a series of cuts that collectively form the base cut. To eliminate torn fibers, he moved down to the top of the base cut, and dropped into a scrape to end the cut.
The inside edge of the bowl gouge adjacent to the tip is the last side that cuts the surface of the wood. This is accomplished by slightly and very carefully rotating/ ‘opening’ the handle of the bowl gouge Then, he used a slicing cut in the wrong direction to form the final shape of the bowl. He watched the silhouette – upper profile – take out high spots.
Shear scraping cut
Similar to slicing cut, the front quarter or third of the blade – not the side, He dropped the tool handle to help present the leading edge so that it doesn’t chip out the fibers.
Combo scraping cut and shear cut
He raised the blade up, by lowering the tool handle, such that the edge floats on the surface of the material, which softens the edge. He continued to turn the interior of the bowl, cutting across the fibers to get a cleaner result. He was mindful of his upper right hand side to avoid crashing into the rim.
When approaching the bottom of the bowl, he emphasized being stable when cutting into the end grain.
Finishing cuts
For the finishing cuts, he sharpened his tool. The bevel touched the wood, and he emphasized how there is no tension in the process. He did not grip the gouge. He pointed out that if there is tension in his left hand, it locks up his knees. He added that he resists the temptation to look at the cut. Focus on the center or where you are heading.

Once the piece was turned, he removed it from the chuck, used a piece of walnut (or any dense wood) and made a jam chuck to complete the bottom. He flattened the bottom with a pocket knife. He then carefully used the point of the live center, making sure he did not make too much contact in case he was not exactly centered. He used his fingernail on the tool rest as a reference point to center the piece. He then turned the foot, blending the old surface with the new surface, using a backward slicing cut. He used a backward sheer cut to finish it off. He then switched to the detail gouge, and finished the bottom, riding the bevel in.

When turning the natural edge bowl, David made a large tenon and a large foot above the tenon. He then placed the tenon in the chuck. He then used the line of the bevel to create the outside shape. He let the bevel float to pick up the high spots on the bowl. The biggest difference between the cut edge and the live edge is how the tool enters the bowls.

Hollow Form
When turning the hollow form, David ignored the pith, and trimmed off the bark to see how he could adjust the log and center it to take advantage of what would look best. He thinks about how the distortion will occur when the piece dries. He takes an interesting piece of wood, trims off what he knows he doesn’t want and then responds to the wood or what the wood tells him. He then reversed the log and put the tailstock end in the headstock. This gives him the freedom to move the piece around. He marked a halfway point in the sphere with a pencil. This becomes the reference point for any change he wants to make. He then used a slicing cut to remove the former tenon. He located the pith and adjusted the wood so that the pith would run straight through, providing order when the wood starts to shift. Once he was satisfied with the grain pattern orientation, he made the new tenon.

David then drew on the whiteboard how to remove the wood from the inside.

He started with a straight tool and then moved to a curved tool. His method is to cut, clean, then measure frequently. He also emphasized the importance of clearing shavings frequently most easily accomplished with an air compressor.

Finally, he emphasized the importance of practicing no matter whether it is bowl turning or hollowing or any other aspect of wood turning for that matter.. There is no substitute for practice, practice, practice!

Those in attendance greatly appreciated his live demonstration.
Thank you David.